Please excuse that my last post has been up for almost four full days. I’ve been busy. Congratulations to those of you who met your NaNoWriMo goals. It’s no surprise that I did not make my NaHoCleMo goal. As I soon realized that 5,000 minutes was akin to setting 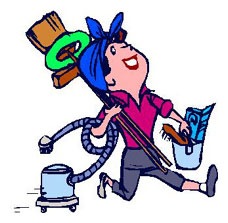 the NaNoWriMo goal to 100,000 words, I knew I wouldn’t. But I did clean and organize three major storage closets and my garage, so I feel pretty good about that. And I’ve reluctantly admitted that my husband was right: I wouldn’t have to sacrifice all that many minutes of my daily writing time  to keep on top of the housework. What can I say? I’ve been a spoiled obsessive.

Besides, it’s true that sometimes the best thing you can do to become inspired is step away from the keyboard now and then. This past month, I sketched out five new story ideas; edited one completed story and worked on another; wrote, or started, three new poems; wrote a brief synopsis and have almost finished a longer one; and tweaked the opening paragraphs of The Brevity of Roses to set the tone better. And speaking of that novel—you know, the one I’ve declared finished three times already—well, it’s getting another facial. That’s indirectly connected to NaHoCleMo too.

When I took my lunch and tea breaks from cleaning, I read inst 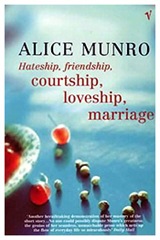 ead of getting online. I read about equal amounts of non-fiction and short stories. I’m slowly making my way through Alice Munro’s Hateship,  Friendship, Courtship, Loveship, Marriage right now. Before that I had tried to read a novel, which I will not name, and proclaimed myself a better writer than that published author. Then I started Munro’s book, which had me lamenting that my writing is indeed garbage and I might as well just face the fact that I’ll never be published. But last week I opened a file of an early draft of my novel and realized how far it’s come since then. So, I pulled out a printed copy of my manuscript and started working my way through it, strengthening, clarifying, and enhancing my prose.

I admit that two writing tips I’ve been reluctant to follow, I now find invaluable:

By the way, if you’re good at punctuation, I have a sticky passage I could use some help on. Any takers?

Now, your turn. Tell me, what are you working on? How’s it going?

Important stuff: I’m using new software to publish this post, so I’d like to know if anyone has trouble with the display.

16 thoughts on “Wrapping up November”