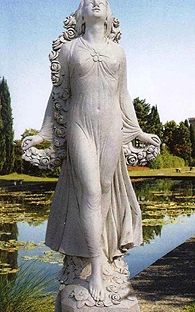 I woke up the other morning with a poem tiptoeing in my head. I had spent part of the night in a delicious dream, from which few actual images remained, but the sense of power lingered. I’m not going to analyze this dream … I know, I know, you’re heartbroken. This time, I’m going to take it at face value. It was a Jalal dream.

For those of you who are new around here, Jalal is the main character in The Brevity of Roses, the novel I’ve just taken through another round of editing. He’s very sensual … and a poet. In my dream, he was trying to maneuver a little “alone time” with Renee, another character in the book. She was preoccupied and tried to ignore him, but finally deigned to give him the attention he sought. Her sense of power over him is what I retained after the cat so rudely woke me ten minutes before the alarm.

Since all I had left was the feeling, I shaped that into words and wrote a poem titled Goddess. And then, I laughed … because, if I changed the wording to Jalal’s point of view, this was surely a poem he would have written. Only, he would have misdirected it toward Meredith (the other woman in my novel) who did not possess the personal power of a true goddess. But his desire was in the right place. And though it took him a long time to figure it out, what he wanted was exactly what he needed: a woman who could have written this poem about herself.

I am a goddess.
Let him approach my temple to kneel before me.
Let him drink his fill of my wine.

I am a goddess.
Let him rise to enter my holy of holies.
Let him prostrate and genuflect.

I am a goddess.
Let him utter prayers to grace my ears with praise.
Let him cry out in joy and debt.

Let his spirit flow into me.
Let him acknowledge, at the moment of his death,
I am a goddess.