I’ve been unusually overwhelmed lately. It’s summer, so that means time spent trying to keep some semblance of order in the gardens; more time spent with local family; and considerable time spent preparing for visits to and from distant family. I fear I’m heading toward a time bankruptcy. Worse yet, I’ve discovered I have creative tunnel vision. 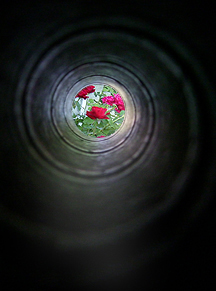 To preserve any writing time at all, I’ve cut down on distractions—which means even less Twittering and blog commenting than before I started the Creativity Workshop. But my writing productivity has gone down, down, down. I no longer have enthusiasm for writing any of the short stories I had set as workshop goals. I get set up to start, then sit there blank-minded. No. Not exactly true, I sit there thinking about working on my next novel. I end up not writing anything at all.

To ignore this, I grab one of the books I’m trying to finish reading before the world ends. You can’t write, if you don’t read. Right? I am not suffering from writer’s block. I know I could write like crazy, if I gave myself permission to work on the novel. But that’s not what I’m supposed to be doing. I signed up for a workshop. I challenged myself to work on a schedule. To set goals and accomplish them. The idea was to increase my creativity. Hmmm …

I admit I’m weak on self-discipline. I thought the workshop would help with that problem. Instead, I’m now questioning whether I have what it takes to be a writer at all. Can I be successful writing only what I want to? Is the real problem that I’m just not creative enough to be a writer? Do I balk at writing something I don’t want to because I’m not clever enough to do that? Or did I just sign up for a workshop at the worst time for me?

I feel like my writer’s mind has splintered into shards. As a mother, I learned long ago to be a multi-tasker, but I think I’m the complete opposite as a writer. In theory, devoting one hour a day to the workshop should have left me plenty of time to work on a new novel. In reality, one hour actually typing might be all it takes, but I need a lot more time than that to conceive and gestate before I birth a story. It might sound ridiculous that writing one short story a week makes it impossible for me to work on the novel the rest of my writing time—and yet, it has.

I’ve been able to balance blogging and writing for almost two years, but then blogging is non-fiction writing. Before the workshop started, I was trying to write short stories, while polishing my last novel and even that didn’t work well. But now that I have a new novel begging for attention, my problem has become obvious—I can’t juggle two new creative works at the same time.

I suppose my primary motive for signing up for the workshop was that I would end up with at least solid first drafts of some short stories. But now I’m questioning:  Do I really need to write short stories? Can you get an agent’s interest without previous short story publishing credits? Or should I focus my creativity on novel writing?

Have I made a decision? *sigh* Does a bottle of wine and a long nap count?