Yesterday was my first day with a totally quiet house again. I wrote a short poem, revised a query letter, and thought about starting another blog—and then things really got crazy. I had intended to return to writing my next novel, but instead I spent the afternoon asking myself what if? Actually, I have starts on two novels, but a couple days ago, the novel I had decided to wait on spoke up. I agonize over choices, so that’s partly why I hadn’t started writing.

If you want to know the truth, I was killing time on Twitter. I asked Kayla how her edits were going, and she asked me what my next novel was going to be, and zap! I remembered a dream I had a couple weeks ago. In the dream, I had torn my last novel apart and made it three novels. I remember telling someone it was the logical thing to do. Then Kayla left for the gym and I got up to start laundry and assorted other housewifey things. But all the time, I pondered, What if …? 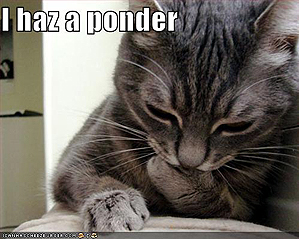 I have three main characters and three parts in my last novel, so I probably could divide and expand to make three novels from it. Why would I even consider that?! It’s crazy. Well then, I could write a prequel or sequel—or both. Would I write about Meredith? Jalal? Renee? Where would I start their story? Where would I end it? Ideas started popping like corn.

Now, I’m aware that this could be some sort of post-novel withdrawal symptom. Or laziness; it would be a little easier to write about characters I already know than to create new ones. And I don’t write genre where a series can be the norm, so I’m not sure I’m up to the logistical challenge. But I have to tell you … asking what if has certainly revived my excitement over writing.

Have any of you done something like this? Does anyone have tips or book recommends, for writing prequels, sequels, or a series?