I get sick of talking about myself, so today I’m going to point you to three other writers who frequently comment here. Yes, this is a long post, but well worth it. I like to support my author friends and it’s been a while since I did that. 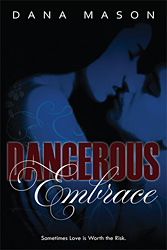 Did you know Dana Mason is a debut author? Her romantic suspense novel Dangerous Embrace is the first book in her Embrace Series. Here’s the description:

Sarah Jennings wants nothing more than a quiet life—alone.
Raised by an eccentric mother, their life on the road only taught her how to run away from hard times. But when she finds herself in an abusive relationship, this lesson serves her well.

Now, back in her hometown, she’s found a place she loves. She’s a first grade teacher, and with few friends and less family around, she has what she wants, a quiet life under the radar where she can be free of her past and live quietly. Finally comfortable in her own skin, she’s settled, and less fearful than she’s ever been in her life.

But it only takes one night and one act of violence for everything to change. Injured and afraid, Sarah wants to run again, but Mark Summors refuses to let her go.

Just when Sarah thinks she can have Mark and the life he promises, her past comes back to haunt her.

Mark Summors was born and raised in Santa Rosa. He married his high school sweetheart and never questioned his life, until he found his wife with another man. Now divorced, he wants something more. He’s passionate about his job, he wants to protect people, and he devotes his life to it.

Darlene Foster is another writer who spends some of her precious time here. She writes the Amanda adventure series for children. Here’s the description for her latest, Amanda in England: The Missing Novel:

Amanda Ross is visiting England and taking in all the sights. She gets lost in the maze at Hampton Court, does some shopping at Harrods, meets the ravens in the Tower of London, explores Windsor Castle, and rides the London Eye. When she discovers a vintage book is missing from a collection, she is determined to find out who stole it. Amanda befriends a pair of tough teenagers from the streets of London, an elderly bookshop owner, and a big, friendly, clever, Maine Coon cat named Rupert. Follow Amanda through cobblestone streets, medieval castles, and underground tunnels in her quest to find the missing novel!

Would you believe the gentleman who signs his gracious comments as Jimmy writes about vampires? Check our James Garcia, Jr.’s horror novel Dance on Fire, which is finally available at Amazon. This is vampire lore with a twist as you’ll see from the description:

Each May, the Central California town of Kingsburg celebrates its Swedish heritage with the annual Swedish Festival: a weekend event where the town puts on its traditional dress, culminating with a dance around a Maypole on Friday, and a Swedish pancake breakfast and parade on Saturday. The town with a population of over 11,000 residents draws thousands more to the event. This year, two uninvited guests also converged upon the unsuspecting town.

Nathaniel is a vampire. He wandered into town, bothering no one; feeding upon stray cats and other vermin, wanting nothing more than to have a place to rest his head. Vincent is a second vampire, and the one responsible for making Nathaniel. He has been searching for his long lost “son” for well over two centuries. Vincent’s goal is to take Nathaniel home or kill him. Nathaniel has often wished for death, wondering why God ever allowed this punishment: to walk the earth undead and unable to be redeemed. Does God remember the little boy from Romania who watched his parents die, was raised by the murdering vampire, only to become one himself? What does God think of Nathaniel and could there yet be redemption for one outside of heaven?

Ten days before the start of the Swedish Festival the most tumultuous week in the history of Kingsburg has begun with two vampires leaving death and destruction in their wake. Kingsburg Police Detectives Mark Jackson and Michael Lopez, Barbara and the entire Lopez family find themselves drawn into something that threatens to destroy them all or leave them scarred forever.
In a marriage of the classic horror story and the Christian themes of good conquering evil and redemption, Dance on Fire is the account of characters being drawn into the fire and the supernatural forces around them watching as they burn.

So, there you go. I hope you’ll give these authors a shot while you’re waiting for publication of that fabulous novel An Illusion of Trust by that crazy lady named Linda who also hangs out at this blog.

15 thoughts on “Three Authors for You”