Thank you all for visiting my blog last week while Christa was in charge. I was mostly unavailable because my mother and youngest sister were visiting from Indiana. And now I’m sick, so today I’ll just share with you some photos I took while we showed them some of the glories of living in California. Enjoy.

Our first stop was Monterrey Bay, where we watched the sea lions, gulls, and boats before we ate lunch.

Next we drove down to Carmel, where I plan to move just as soon as I win the lottery. 🙂 The April sun was warm, the wind chilly, but the sand was light and fine as sugar.

We ended our coastal experience at Pacific Grove. The wind was even stronger and colder here, but the view was fabulous. I really need to live by the ocean, people.

Another day we went to Yosemite National Park. My mother had been there before when my father was still alive, but she only vaguely remembered that.

Next we viewed Bridalveil Falls. First from a distance and then up close where the wind blew the falls into their full veilness.

We ended our visit to Yosemite with a picnic beside this river. It was warm and sunny and perfect. In the same week, I spent time at my two favorite places: the mountains and the ocean. I’m not a hiker, swimmer or surfer, I prefer just to sit quietly and commune with nature. There wasn’t much time to do that on these trips, but maybe someday soon. At least we had homemade chocolate chip cookies—with pecans!

Too soon the visit was over. My mother is 89-years-old and I doubt she’ll make another trip out here, so I’m happy we had this opportunity to take her to some beautiful places. Plus, she loved the cookies. 🙂

I’m “vacationing” from my virtual life this week. Where I live, this is the last week of vacation before the school year begins, and I’m being visited by granddaughters. By the end of this week, I’ll have seen four of my five, and spent considerable time with two of them. With those two, it’s serious craft time with one and movie time with the other. 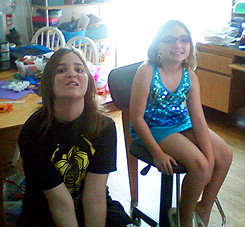 Fortunately, nine-year-old Emily uses the glue gun herself own now, which is a relief because I can’t get within two feet of one without decorating my fingers with burns. She always packs as much color as she can into a project, so after we watched the fourteen-year-old Adrienne’s movie choice, Yellow Submarine, Emily crafted the peacock below. Adrienne went with this psychedelic mushroom.  Hmmm … yeah.

Unfortunately, among movie girl’s other choices this week have been The Mothman Prophecies and then a documentary titled The Eyes of the Mothman. I enjoy watching them, but I regret it when I get up in the middle of the night to go to the bathroom. I am not fond of the dark. I have an active imagination.

I can’t blame my recent series of nightmares on Adrienne though because it started before she arrived. So far, I’ve had one where the whole world has gone mad and blood-thirsty people are at my door. Another where I’m in charge of a baby who is not really a baby and I’m rushing to get it somewhere, but every direction I try to go is flooded.

I even had a dream I haven’t had in twenty years. You know, one of those high school stress dreams. This time, I sensed that I was essentially homeless, but had been staying in this house with a couple of old women I didn’t know. It was the first day of the semester, but I had no idea how to get to the school from this house. I knew I was going to be late, so I would have to report to the office when I got there, but I couldn’t remember where that was, and then I realized I didn’t have my class schedule. 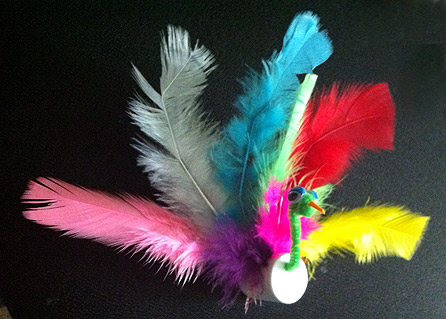 Yeah, I’m stressed about finishing this WIP. Specifically, I’m stressed because I’m unsure about the final scenes I planned.  So, I have a baby, that’s not really a baby (it’s nearly a full book), and I’m pushing to get it to the end, but I’m flooded with alternate ideas. These assaults on my original plans seem like madness trying to get in my door. And I’m suddenly in a place I didn’t plan to be, trying to get to where I’m supposed to be, but I’m late, unsure how to get there, and I’ve left my schedule (outline) behind.

How’s that for a “vacation”?

The Christmas Eve I was five, I woke my little sister, took her by the hand, and made her sit at the top of the stairs to watch our parents take our Christmas gifts out of the closet below the staircase. My objective? To prove to her that Santa wasn’t real. Why I don’t know. I don’t think I was a particularly mean sister. I can’t even remember how I knew Santa was make believe.

My  parents didn’t discover us peeking, and my sister didn’t rat me out, so I went along with the Santa story for years after that night. Why? Because I believe in make believe.

Science can’t explain everything. Religion tries. Children simply believe. As we get older, we lose some of that capacity for hope against all odds, the certainty that, if we wish hard enough, it will be so. Star light, star bright …

I reserve room in my imagination for the magic of fairies, and elves, and unicorns, of ghosts, and Nessie, and Bigfoot. As a fiction writer, I think that’s only fair. When I offer you my writing, I ask you to enter a world of imaginary people, in imaginary places, doing imaginary things. I ask you to believe in my make believe.

And I’ll do my best to write it well, so no big sister will whisper in your ear and destroy the illusion.

Endnote: If you read this post and took any comment as a slight to your religious beliefs, please know that I had no such intent.

It’s less than three weeks until Christmas. I’m sure you already knew that, but it’s just hit me. The only decorating I’ve done, so far, is here on this blog. I’m not doing much shopping this year, but I’ve put a few little things in my online cart. I’m clearly lagging behind.

I don’t even have a good excuse. It’s not like I’m writing up a storm. (I wish.) One of our sons is a member of the Jazz Composer’s Orchestra, and tonight we attend their annual holiday concert, so maybe that will get me in the mood. Even if it doesn’t, I have no more time to waste.

At least I don’t have to plan any menus. We’ll be going to a son’s house for Christmas day, and our Christmas Eve dinner is always the same. We have a Syrian feast. My husband will make the kibbee (triple-ground round steak with cracked wheat and onions) to prepare three ways—my favorite is nayee (raw).

Probably a granddaughter or two will come over to help roll the grape leaves, but it will be up to me alone to see if this year I can successfully make the vegetarian version.

My husband and I make the hummus together. I’ll cook the lubee (grean beans) and pilaf, and make tabouleh, and khyar bi laban (cucumber yogurt salad). Maybe I’ll get ambitious and make fatayer sabanigh (spinach pies). For our oldest son who fondly remembers his Aunt Ronni’s American addition of creamed corn, we’ll have a little of that. Of course, we’ll also have pita, yogurt, olives, braided cheese, raw veggies, baklava and cookies.

And wine, of course! As you can see, the women start on that in the kitchen and we laugh a lot.

This year, all of our sons and grandchildren will be here. At some point, our second son will measure all the grandchildren against the inside of the closet door. Gifts will be given out, starting in an orderly fashion and ending in joyful chaos. And this year, hopefully, we’ll remember to take a family group photo before anyone leaves.

Your turn: What holiday traditions do you observe in your family?

First, I want to thank all who took the time to read my short story, “Perchance to Dream“. I didn’t mean to leave that post up so long. I had hoped to publish a new one this past Sunday, but during my time spent in Indiana, I had even less internet access than I thought I would. I returned to my Pacific Time home yesterday afternoon, exhausted, and went to bed still on Eastern Time. After ten hours sleep, I feel almost normal. So I’m up before dawn writing this post.

Today’s photo is of my son and his grandmother (my mother), taken after his doctoral commencement at Ball State University. That ceremony was the highlight of my trip, of course. The next day, we had a big Syrian dinner with my husband’s family where both the wine and conversation flowed like water. Most of my time away, I spent with my mother and two sisters in the home we moved into when I was fifteen.

It’s always a weird experience when you return to a place that never changes. No, my mother hasn’t kept everything the same since the late 60’s, but the décor in La Maison de Cassidy, for the most part, has not changed since the 80’s. Every mirror where I checked my hair, makeup, and clothes on high school mornings and before weekend dates still hangs where it did then. Unfortunately, I look completely different in them now.

Okay, it’s now over three hours later and I still haven’t finished this post. Life intervened. But what’s life without life? I do have a few writing-related things on my mind, so expect a bit more meat next time.