A couple mornings ago, some words popped into my head while I pruned spent roses. I rolled the words around on my mental tongue and realized I had a pretty good opening line, but no other lines came to me as I worked. When I came back inside, I sat down to research my next poetry form for the Creativity Workshop, but I just couldn’t concentrate. I closed the book and started to get up from the table. Instead, that line came back to me and I reached for my pen and legal pad. 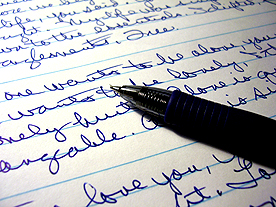 I wrote down that first line and the floodgates opened. Out gushed two whole pages, as fast as I could write. It was spontaneous writing, and not half bad, but I wasn’t ready to look at it too closely yet. I didn’t even know what I had written. Flash story? Some form of poem?

This writing experience felt magical because it was not how I usually work. I didn’t sit down, close my eyes, and wait to see a scene or hear a conversation. I just wrote it down, then set it aside, to get a little distance.  Later that night, as I washed dishes I thought about the piece. I had written from the viewpoint of a woman caught up in a relationship and trying to sort out her feelings. The voice seemed familiar. After I put away the last dish, I re-read what I’d written. Each stanza(?), paragraph(?) started with a you said/I thought statement, and as I read those my eyes widened. Then I laughed.

These words could very well have been a conversation Meredith, a character from my recently completed novel, might have had with herself. I believe, in my subconscious, she did. That’s why it poured out so effortlessly. I just feel a little stupid that I didn’t see this while I was writing it.

I love these little surprise gifts, don’t you? 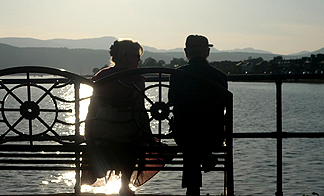 For some time now,
I have been aware of you in the shadows.
I was too busy then to pay attention.
I am ready now.

Come sit with me by the water.
Tell me your story.
Don’t leave anything out;
I want to know it all.

Show me what you see.
Give me a taste of what you eat.
Play for me the sounds you hear.
Take my hand and let me touch everything.
Waft the scents my way.

Speak.
Say what you said, what he said, what they said.
I want to know every word.
Give me the jargon, the slang, the poetry.

Share your feelings.
Do you love?
Do you fear?
Are you hopeful or despondent?
Where does your anger lie?
Why do you hate?
Let me experience it with you.

Give me a tour of your home.
Show me the sights in your town.
Take me for a drive in your car.
Let me peek inside your closet, your medicine cabinet, your refrigerator.
Show me your books, your bills, the tools of your trade.

I want to be you.

I must be you.

And then,
I can write your story.

The idea for my current novel came from a dream, so I had a visual of my main character Jalal from the start. In general, I first see my characters as a type and then I picture someone, usually a celebrity, who fits the type. I’ve visualized my character Meredith as three different actresses and now, she’s a sort of combination of all three. My character Renee started out tall and blonde, but when her backstory changed, so did her appearance.

Yesterday, in my blog comments, Susan Bearman lamented that she hasn’t been able to “see” her main character. On her own blog, she’s described his hair, eyes, smile, hands, and yet she feels his face is fuzzy. She concluded she’s not a “visual thinker.”

I’m a portrait artist, so I’m very “face oriented” and don’t think I could write about my characters, if I had no mental pictures of them. I need to see the details, not only of their faces, but of their clothes, homes, cars, places of work, places they shop, what they eat, etcetera, even though most of these details don’t factor into the story. I have to believe my characters exist, on some level, to write about them convincingly.

Maybe I’m obsessed. Maybe I’m insane. Tell me, if you write fiction, how much effort do you put into visualizing your characters and their world?

8 August 2009 Linda Cassidy Lewis
Visiting New York City was never on my bucket list, but I’m home from my first trip there and I confess; I loved it far more than I expected to. I’m not averse to cities. I grew up in Indianapolis, and when I moved back to that city after living away for ten years, I was thrilled to see how much it had grown and developed its “downtown.” That was only a microcosm of Manhattan, though.

I had the impression NYC was overhyped. I was wrong. I quickly tired of the traffic and hustling crowds, but I could spend many hours in Central Park and the Museum of Natural History. It was humbling to stand quietly for a moment contemplating what the sight of the Statue of Liberty has meant to so many people.

I could feel at home in Greenwich Village, slipping into a routine of grabbing a breakfast sandwich from a deli, fruit from a sidewalk display, or a coke and a slice of real pizza. I would love spending warm summer evenings people watching or sunny winter afternoons reading in Washington Park.

I tell myself these things and yet inside, I know that I’m only capturing these scenes through my writer’s eyes. I’m creating a world in my imagination. In reality, I’d end up spending most of my time in front of this computer trying to create the stories that could very well be taking place in New York City … or my own.

The bulk of this post is a repeat from last year. I was reminded of it while reading Cynthia Newberry Martin’s blog post this morning. Since the topic is still worthy of discussion—and I’m frantic with preparations to leave Friday morning for my New York City trip—I decided to repost.

It seems to me, the difference between the people who love to read and the people who are literate, but don’t read for pleasure, is the ability to visualize what you read. If the written word transports you to another world, it’s because you “see” that world. Some people find it hard to visualize the story. But sometimes even people with that mental eye have a hard time with a book, and that’s the author’s fault. We’ve all heard the admonition to “write what you know” and that’s good advice—then again, you can learn most of what you don’t already know. But can you write what you don’t see?

Now, I confess, I don’t know everything about writing, and I don’t write the way the how-to books tell me I should. I don’t start with an outline or proposal. I start with a scene. More specifically, I start with a conversation between the characters in that scene. And more often than not, the scene came from a dream. Maybe that’s why I do most of my writing with my eyes closed … I see the setting, watch the action, listen to the dialogue, and then I open my eyes and type. Even when I’m in a situation where I can’t close my physical eyes—when I’m driving, for instance—my mental eye is in that shuttered place where the story plays out. I can’t write what I can’t see.

Of course, the problem is that sometimes I fail to translate enough details of the “movie” to the page, and I thank my critique partners for pointing out those instances to me. But first, I have to see my story world because if I haven’t, how can I expect to transport my reader there?

After all, isn’t an author’s ability to draw us in and make us lose ourselves in their world, the reason we read fiction?